VIVIEN CURRIE RECEIVES MBE FROM THE DUKE OF CAMBRIDGE FOR HER SERVICES TO RACECOURSE MANAGEMENT, BUSINESS AND CHARITY

VIVIEN CURRIE RECEIVES MBE FROM THE DUKE OF CAMBRIDGE FOR HER SERVICES TO RACECOURSE MANAGEMENT, BUSINESS AND CHARITY

Vivien Currie, Chief Executive at Hamilton Park, was honoured with an MBE from the Duke of Cambridge on Tuesday 16 November at a ceremony at Windsor Castle. 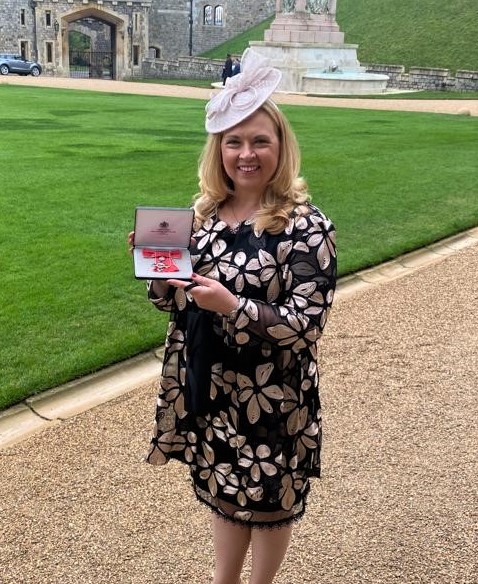 The prestigious award is in recognition of Vivien’s incredible period of success at the helm of the 5-star Lanarkshire resort. Under Vivien’s leadership and management, Hamilton Park has developed an award-winning reputation within both the business and horseracing communities, scooping multiple accolades and awards alongside achieving record attendances and major growth in its conference and event business.

Vivien’s ambitious plans for the venue saw the completion of a £10m on-site hotel, a project that she worked tirelessly to deliver in just three years. Offering 118 rooms, the new development has created more than 20 new jobs and is projected to generate an additional £5.9m in annual visitor expenditure as well as deliver significant economic impact for the surrounding area.

As an early member of the Racecourse Association’s Raceday Experience Group, Vivien was at the forefront of bringing the sport together to share best practice, before a 6-year appointment to the RCA Board as Vice Chair saw her continue to influence the direction of the industry. She was a non-executive director of the British Horseracing Authority between 2016 and 2019, and continues to have a major impact on the industry at the highest level whilst overseeing the continued development of Hamilton Park.

Vivien was also a member of the Development Board at Marie Curie Cancer Care, which raised over £1M to fund the workings of the Glasgow Hospice. In addition, she also proactively supports numerous charitable causes through both her business and personal interests.

Vivien Currie said: “This is a very special moment for me and my family, and I am incredibly honoured and humbled. The Horse Racing industry is such a wonderful sport to work in.  Every day is different and I have been so fortunate to work alongside so many great people from so many different organisations within it.  My career has been so rewarding thus far; it doesn’t feel like work.  To be honoured for doing something that I enjoy so much makes me one of the luckiest people ever.”

Vivien was a named as an MBE recipient last year but the ceremony was postponed due to the pandemic.

You Are Here: Home News VIVIEN CURRIE RECEIVES MBE FROM THE DUKE OF CAMBRIDGE FOR HER SERVICES TO RACECOURSE MANAGEMENT, BUSINESS AND CHARITY