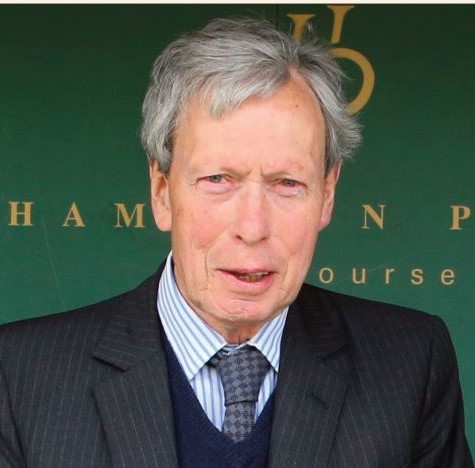 It is with great sadness that we learnt of the recent passing of Sandy Struthers OBE, Patron of Hamilton Park.

Whether as an owner, breeder or administrator, Sandy was at the forefront of British horse racing for more than half a century. Yet, one of his most enduring and valued roles over the last few decades was as a director and more recently as Patron of Hamilton Park.

On racedays, you would often find him on the paddock rails, having a quiet word with racegoers, whether it’s to do with finding the winner of the next race or asking for an opinion on the racecourse facilities.

Over the years Sandy owned several outstanding horses and, although narrowly missing out on Classic glory, he has had runners placed in the Derby and Oaks at Epsom as well as the Irish Sweeps Derby and the Irish 2000 Guineas.

He rose from stewarding at Hamilton Park to become the deputy senior steward of the Jockey Club. And all the time, he was running the family shipping firm while also holding posts such as chairman of Caledonian MacBrayne and Commissioner of the Northern Lighthouse Board.

The records show that after an early education at Kelvinside Academy in Glasgow and prep school in Crieff, he moved to Stowe School in Buckingham before going on to read history at Trinity College in Cambridge.

What the records of his graduation do NOT show is the amount of time he spent driving from Cambridge to Newmarket to watch early-morning gallops! This keen interest in racing had been nurtured during his days at Stowe and he admits he could just about recite the breeding and pedigree of every horse in training in 1944.

He ventured into ownership in the 1950s but it was Ratcatcher who first carried his colours to win four times in 1961, when trained by Gerry Laurence at Cree Lodge Stables in Ayr.

This eventually led to him having horses with the fledgling trainer, John Dunlop, who had moved into the private stables of the Duke of Norfolk in Arundel on the Sussex Downs. And that link with Dunlop – who went on to train two Derby winners and become champion trainer – produced remarkable results from memorable horses, especially from the mid-1960s to the late 1970s.

It was, perhaps, unfortunate for Sandy that his best horses were racing at a time when some of the sport’s greats were around, such as Sir Ivor, Nijinsky, Mill Reef and Brigadier Gerard but his grey, pink sleeves and check cap colours were in the winner’s enclosure for many of the big races.

During that golden era, Sandy had SCOTTISH RIFLE – named after his regiment, The Cameronians (known as the Scottish Rifles) – who won the Eclipse at Sandown and was second in the Irish Sweeps Derby and Benson and Hedges Gold Cup and even ran third to that great mare, Dahlia, in the Washington DC International.

There was also MOUNT ATHOS. Third in the Derby at Epsom behind Sir Ivor in 1968 then wins in the Princess of Wales’s Stakes and the Gordon stakes before finishing second in the Coronation Cup the following year.

Pitcairn went on to become champion sire in 1980 with the multiple Group winner, Ela- Mana-Mou, among his offspring. Out of his broodmare, Ruddy Duck, Sandy owned BONNIE ISLE, who was runner-up to Scintillate in the Oaks at Epsom in 1979. And he also achieved the ambition of every Scottish owner when JOHN SPLENDID won the 1970 Ayr Gold Cup and was third in the same race a year later.

Sandy’s reputation in racing was such that he went from stewarding at Hamilton Park in the 1960s to becoming a member of the Jockey Club in 1981 before being appointed deputy senior steward to Lord “Stoker” Hartington in the early 1990s, helping to oversee the handover of many of its responsibilities to the British Horseracing Board. He was also a steward at Newmarket, Ascot and Cheltenham.

It is typical of Sandy’s sense of humour that, as the number two to Stoker Hartington, he referred to himself as “the Dan Quayle of the Jockey Club” – Quayle being Vice-President of the USA during George H.W. Bush’s presidency.

The father of three daughters – Stephanie, Annabel and Lorna – he was insistent in 1997 when Stephanie and husband-to-be Jamie Fraser were picking a date that he “couldn’t host a wedding on Grand National day”.

So, the Saturday after the great race was booked instead but when the National was postponed due to an IRA bomb alert, Sandy was in a panic that it may be rescheduled for the day of the wedding! Fortunately for Sandy – and the couple – it was run on the Monday, allowing wedding plans to proceed as scheduled.

All this time, Sandy was running the independent family shipping business, J & A Gardner and Co. Ltd., from offices in Glasgow, just a few miles from the family home at Craigmaddie on the north side of the city.

While racing may have been his passion, the tragic loss of two elder brothers in World War II, aged just 21 and 19, and a father still suffering the effects of the First World War, meant Sandy was the only member of the family left to take the helm of the business.

It had been founded in 1860 by his great-grandfather and the ships were used to move stone they excavated from granite quarries owned by the family near Ballachulish. From those early days, the company expanded to working for the Ministry of Defence in the Falkland Islands.

A nautical theme runs strongly through Sandy Struthers’ life – he is a past chairman of the ferry company, Caledonian MacBrayne, and also held the post of Commissioner of the Northern Lighthouse Board. He was made an O.B.E. for his services to shipping.

Down the years, Sandy has enjoyed giving his racehorses and company ships names with a Scottish or family connection.

We’ve already heard about Pitcairn and Scottish Rifle. Stephanie remembers, as a child, lighthouses such as McArthur’s Head and Sule Skerry featuring prominently while the company ships were all named after rather obscure Scottish Saints.

And for those wondering why the Struthers racing silks are grey and pink? Well, that goes back to the early days of J & A Gardner and the excavation of all that granite, whose two main colours are – grey and pink.

For many years, Sandy was a director of the company that runs Hamilton Park; his experience, wisdom and wit appreciated by many chairmen and fellow directors down the years. As someone at the very heart of racing’s regulation and decision making for so long, he has been a valuable Scottish voice and presence during the sport’s ups and downs over the last half-century.

In 2015 Sandy stood down as a director of Hamilton Park, but the board was delighted when he accepted the position as the very first Patron of the racecourse, a role he held until his sad passing in November 2020.

The board of directors and the whole team at Hamilton Park offer their condolences and best wishes to Sandy’s family and friends at this difficult time.